Today, I have the pleasure of bringing you the interview of Ken Williams, a Santa Barbara author who writes books about the homeless. His latest book, “Fractured Angel,” deals with the homeless in California. 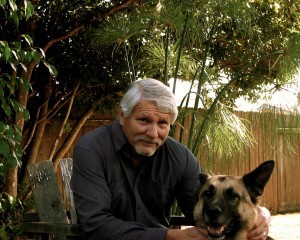 Tell us a little about yourself and your background

I was a social worker for the homeless in Santa Barbara, California for thirty years. My main clientele were the mentally ill, the physically disabled, those impacted by drugs and alcohols, families and veterans. I now write full time.

Which writers inspire you?

I was greatly impacted by John Steinbeck. Also, the author of: I NEVER PROMISED YOU A ROSE GARDEN. I read this novel after being medivaced to the hospital ship, USS REPOSE in 1969 during the Vietnam War. This novel of a teenager suffering her first psychotic break helped me see beyond the horrors of that hospital ship and the war, and launched my life-long desire to work with the mentally ill. The book changed my life by giving it direction. It also taught me the incredible power of the novel to influence the individual. Later, I would come to appreciate the novel’s ability to move society. President Abraham Lincoln is quoted as saying to Harriet Beecher Stowe, the author of UNCLE TOM’S CABIN: “So you are the little woman who wrote the book that started this great war.”

So, what have you written?

CHINA WHITE: During the Vietnam War, a CIA field agent becomes addicted to the adrenaline rush of combat. Now, thirty years later, this need for the rush collides with his attempt to resurrect the old pipelines for China White from the Golden Triangle. This interplay forces two men who were enemies during the war-an ex-Marine and an ex-North Vietnamese soldier-to work together when this highly potent form of heroin brings death and destruction to their community.

SHATTERED DREAMS, A STORY OF THE STREETS: Shattered Dreams is a memorable story about the pain, fears, hopes, and dreams of the homeless and those who commit their lives to serving them. It portrays the human side of the mentally ill who find the streets their home.

THERE MUST BE HONOR: In one of the world’s most beautiful places, amid swaying palms and ocean breezes, Ken Williams battles death and hopelessness. In There Must Be Honor, Ken traces a journey behind the golden façade of Santa Barbara’s scenery and into the panting heart of its streets.

FRACTURED ANGEL, How would you go about trying to help your daughter who, suffering her first psychotic break at fifteen, is chased by her wounded mind to the streets of Santa Barbara? FRACTURED ANGEL is my newest novel.

I've written several other unpublished novels, screenplays, short stories and poems. All my published books can be bought on amazon.com, kenwilliams-writer.com and other outlets. To see my blog, stories and poems, please visit my website.

Give us an insight into your main character. What does he/she do that is so special?

Kerry Wilson is a Marine combat veteran who is haunted by the war. He has not only dedicated his life in helping the mentally ill homeless but finds refuge in that work. When Lynne Swanson arrives in Santa Barbara to look for her mentally ill homeless daughter, it sets into motion a series of events that forces Kerry to realize just how much he has hidden his pain and loneliness in his work.

What are you working on at the moment?

GAIA’S REVOLT takes place a few years in the future. Global Warming has let to constant war for energy resources while frying the planet. The economy of the United States and the world have been severely impacted leading to ever increasing polarization between the rich and the have-nots, widespread homelessness, poverty and an increasingly belligerent corporate elite. Devastating extreme weather events hammers the planet. In this background regular people struggle as they always have to work, provide food and shelter to themselves, families and people they care about.

When did you decide to become a writer?

A Hollywood scriptwriter attended a lecture I was giving. He came up to me and said that the stories I used to illustrate my talk would make a great script. I wrote several scripts then started writing novels. I also write articles, poems, and opinion pieces for various news outlets.

Why do you write?

A really good question! For several years, I've kept journals. I began journal writing when I realized that I was beginning to forget the particulars of my homeless clients who have died. During the AIDS and crack epidemics I was losing three to four clients/friends a month. Writing about them, their circumstances, who they were was like a pressure cooker being released. Since then, a friend of mine has inscribed the names of my homeless clients/friends who have died in Santa Barbara on a wall in his house. Over three hundred names are on that wall! Their memories give me inspiration to write. Their stories, even though fictionalized deserve to be heard.  Authors, artists and those with a caring heart must address this national disgrace. The political establishment will never come to grips with this issue unless we force them to. Much as the GRAPES OF WRAITH, THE JUNGLE and UNCLE TOM’S CABIN forced society to face the issues of their day, I hope my novels can likewise play such a role.

Many thanks to Ken Williams for agreeing to be interviewed and talking about this very important topic.  For more information about him and his books, visit http://www.kenwilliams-writer.com/

I hope you enjoyed this first installment of my new author interview series.  There will be more to follow.