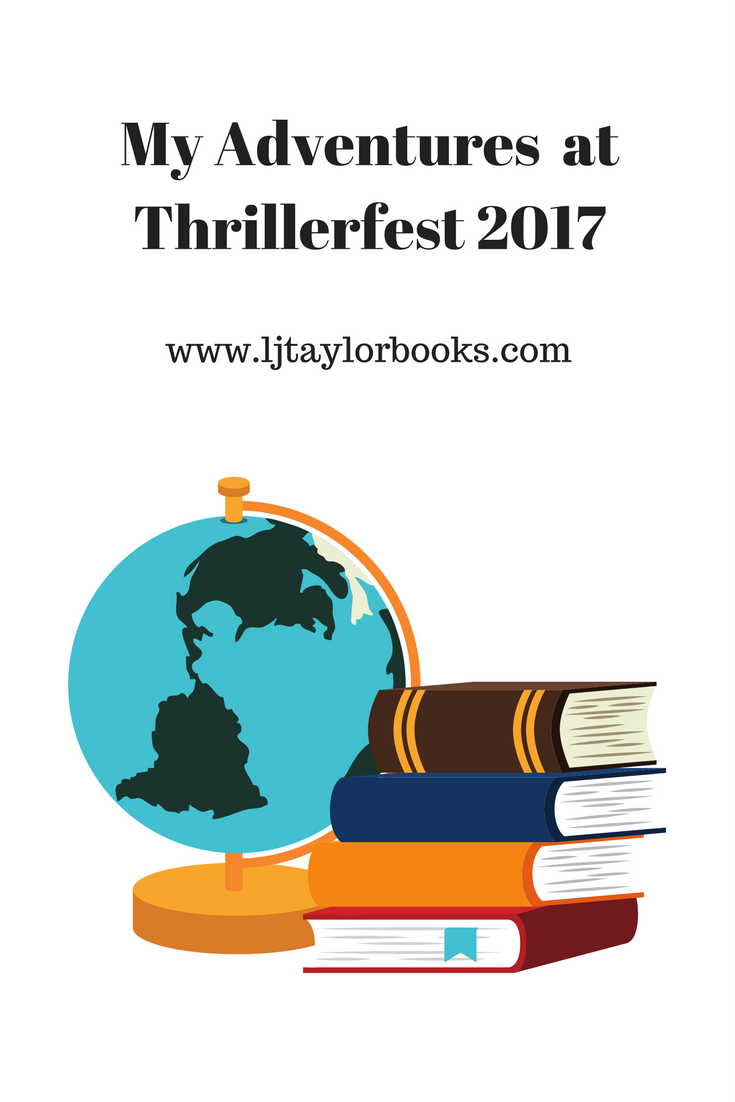 A few weeks ago, I attended Thrillerfest 2017 – the premiere conference for thriller enthusiasts, which brings together famous authors and new ones along with industry professionals, agents, and fans. The conference, which took place from July 11-15 at the Grand Hyatt in New York City, is divided into three distinct parts (four if you count some of the preceding activities): Craftfest, Pitchfest (formerly known as AgentFest), and Thrillerfest.

Craftfest is comprised of writing seminars designed to teach the art of thriller writing.  In addition to the writing seminars included in the overall conference fee, one could, for an extra fee, attend the Master Craftfest, which is comprised of eight writing classes taught this year by  Steve Berry, Lee Child, Gayle Lynds, Grant Blackwood, Meg Gardiner, and Andrew Gross. I did not sign up for the Master Craftfest.

Pitchfest is like speed dating with agents.  Each person who signs up gets a few minutes with agents to pitch their manuscript or book proposal.  Hundreds of writers are lined up and sent into a room to pitch 50 or so agents and a few editors.  Those who plan to participate in Pitchfest would do well to prepare in advance.  It's a good idea to research the agents and editors online, find out which ones are looking for your type of book and make a beeline for them first when you get to Pitchfest.

Thrillerfest is composed of additional craft and career seminars, as well as book signings and other events. The main event for Thrillerfest 2017 was the ITW 12th Annual Thriller Awards Banquet, which was held on Saturday, July 15, 2017.  At the banquest, the 2017 ThrillerMaster award was presented to bestselling thriller author Lee Child (the creator of the Jack Reacher series by the 2016 ThrillerMaster Heather Graham.  The 2017 Silver Bullet Award was presented to bestselling author Lisa Gardner by the reknown thriller author John Lescroart. The most coveted award – the 2017 Thriller Legend Award was presented to Tom Doherty by Jon Land.

I'd been to Craftfest and Pitchfest before, but this was the first time I attended Thrillerfest. I took the whole week off from work so that I could participate in most of the events.

I signed up to volunteer at the conference again this year. I like doing that. It makes me feel like I'm a part of the event. It also helps me make new friends and gives me the inside scoop on the goings on. Plus, it helps me get up close and personal with some of the famous authors.  For example, last year, volunteering at the conference gave me the opportunity to meet one of my favorite thriller authors – Jon Land – and to attend dinner with him and a group of authors at a nearby restaurant.  This year though, my assignment was to be the timekeeper who informed the speakers when they had ten minutes left before the end of the seminar.  They gave me a ten minute, a five minute, and a “wrap it up” sign to hold up at the appropriate times.  Needless to say, I wasn't very popular with the speakers this year. 🙂  Just kidding.  They said that I was very discreet. That faint praise made me wonder how the other timekeepers behaved.

On Monday, July 10, 2017, I visited FBI Headquarters in NY to attend seminars on forensics and such.  The FBI allows a small contingent of writers from the conference to attend in the hopes that we portray the agency more accurately.  To get a full account of my visit to FBI headquarters, see my previous blog post here.

Since Craftfest wasn't scheduled to begin until Wednesday, July 12th, I got some much needed sleep on Tuesday and got some writing done. I also used that day to scout out sources of vegan food and to stock my room with fruit, almond milk, cold salads, etc. so that I could make smoothies during my stay. To learn more about my vegan culinary adventures while in New York City, check out my health blog here.

On Wednesday, Craftfest began in earnest. I attended scores of craft seminars – some as a timekeeper and others because I had an interest in the topics discussed.  On the second day of Craftfest, I had an epiphany.  In fact, I came to several realizations, the first of which was that, having written and published four books under two different pen names, I already knew a lot about what was taught in the craft seminars about pacing, plotting, prose, etc.  Don't get me wrong, I still learned a few nuggets of wisdom that made the conference fee worthwhile, but I already have the basics down.  It took actually writing those books, getting them edited by a professional editor, and publishing them to drive that knowledge home for me.

Thinking about how far I've come as a writer makes me cringe when I think about the type of work I used to submit to agents at Pitchfest in past years hoping to get signed up.  Back then, I didn't realize that I was formatting my dialogue incorrectly.  That work also had a lot of rookie mistakes like opening a novel with a dream sequence, for example. It made me realize that I have a much better chance now at finding agents and editors to sign me up than I did before.  I may decide to participate in Pitchfest next year and see what happens.

Thrillerfest began with a reception on Thursday, July 13, 2017 and ended with the banquet on Saturday, July 15, 2017.   Thrillerfest's seminars were more focused on the thriller genre, the thriller market, and issues facing the thriller author.  I listened with rapt attention since my next project (after finishing Caged Dreams and my holiday novella) is to start a spinoff thriller series featuring Tara and Tyrone – the brother and sister CIA agents from The Liberian Agenda.

All in all, I had a great time.  I learned a lot, mixed and mingled with thriller authors, ate some fantastic vegan fare, and caught up with my Dad and some of my siblings while in New York.  I also met my new baby niece for the first time.  She's five months and adorable. I would post a picture of her, but my sister won't let me.